This very unique piece of exotica was specially made by Doug Irwin (Jerry Garcia’s Luthier) for Bob O’Connor, the lead guitarist of the 70’s West Coast band “$27 Snap On Face”. The ‘solid’ three-layer maple body is carved in the shape of a US Dollar Sign and weighs 7.80 lbs. The top and back of the body are of a very rich and dark shade of handsomely aged flame maple, which in turn cover the light maple center. Three-piece maple neck with two mahogany strips and a nut width of 1 5/8 inches and a thin and very fast profile. Beautifully grained walnut faced headstock with Doug Irwin’s famous “Eagle” inlaid in Mother-of-Pearl, beneath that an inlaid engraved metal ‘Heart’ and below that $27 / SNAP / ON / FACE inlaid in abalone. Hand-fashioned brass nut. Truss-rod adjustment nut at body end of neck (accessible from neck pickup cavity). Individual Schaller “Roto-Matic” tuners with half-moon metal buttons. Ebony fretboard with 21 jumbo frets and hand crafted inlaid abalone “currency” symbol position markers denoting at the third fret – The British Pound Sign; at the fifth fret – The German Deutsche Mark; at the seventh fret – The French Franc; at the ninth fret – The Japanese Yen; at the twelfth fret – A ‘Double’ US Dollar Sign; at the fifteenth fret – The Netherlands Guilder; at the seventeenth fret – The Paraguayan Guarani; at the nineteenth fret – The Mexican Peso, and at the twenty-first fret – The Polish Zloty. Silver side-dot markers on bass side of neck. Inlaid on the face of the treble horn is an arrow-pierced heart-shaped mother-of-pearl inlay which is engraved “Love Forever / Bob & Gailyn”. This is a fully independent, stereophonic guitar with independent, isolated passive pickup circuits. Two Gibson “Patent No” Humbuckers with black plastic pickup surrounds and rectangular black labels on the underside with perfectly balanced outputs of 7.66k and 7.65k. The metal pickup covers are covered in a special “design tape” with circular engraving. The bridge pickup black plastic surround has been cut into in order to accommodate the ABR-1 (retainer) Tune-O-Matic bridge which has six individual metal saddles. Four controls (two volume and two tone) and a three-way pickup selector switch, all mounted on a brass control plate with circular engraving and five (of six) screws. The potentiometers are all dated “137 7408” (CTS, February 1974). Unique ‘circular engraved’ tailpiece. The guitar houses on the treble-horn a three-way rotary switch and two two-way mini-toggle switches (non active). These are accessible from the back cavity where future audio designs can be tested and incorporated. This cavity has a circular engraved brass cover with six screws; This dedicated area is the “protolab.” Two independent jack sockets on the back of the body (one for each pickup) which allows the signal from each pickup to be processed and amplified separately. This incredible ‘Work of Art’ / ‘Piece of Rock ‘n’ Roll History’ is in exceptionally fine and all original (9.00) condition. There is some fine finish checking and the back of the neck does not have any coating of varnish as originally made. Housed in the original rectangular black hardshell case with black leather ends and dark blue plush lining (9.00). Together with the original 1977 vinyl album “27 Snap On Face” and a copy of the 1977 magazine “Creem” reviewing the band…

Doug Irwin was one of the greatest custom guitar builders of the 1970s. After teaching himself guitar building he got a job at Alembic. While on the job, he began to cook up a guitar on his own in his kitchen. Jerry Garcia, of The Grateful Dead, saw this guitar, “the Eagle,” Irwin’s first guitar under his own name, and fell in love. Irwin wound up building five guitars for Garcia – Eagle, Wolf, Tiger, Wolf Jr., and Rosebud- all, after Garcia’s death, selling at auction for over $500,000 each. Doug Irwin, a true innovator, had become the most-sought-after custom builder in the trade, a humble genius.

“One afternoon in the summer of 1974, I was driving home…when I spotted a man, in the middle of a dry field…holding a firework display in his hands that was spewing golden sparks…My curiosity got the better of me…This was the day I met Doug Irwin….

“…Over the course of next few days I kept finding reasons to drop by Doug’s place. I really enjoyed hanging out watching this guy move from one unfinished guitar project to the next, listening to his stories about all the famous and infamous guitarists…He had no apprentice; he did it all, start to finish.

“After a while we simply became friends…It was only a short time later that I asked him if he would consider building a guitar for me. He said, ‘Sure, what flavor?” I said I needed something that would showcase the name of the band and that I would bring him an actual size drawing of my idea the next day. I returned the very next day with my drawing in hand. This was the birth of Doug’s most unique guitar, the screaming ‘$’ guitar” (Catalog note, Guernsey auction, 2002).

O’Connor can be heard playing the Screamin’ Dollar Sign on the group’s 1977 album, $27 Snap On Face, and can be seen playing it within the album cover’s fold-out gateway.

Any guitar built by Doug Irwin during the 1970s-1980s is piece of guitar-making magic.

Included with the guitar is a copy of the August 1977 issue of “Creem” [America’s Only Rock ‘n’ Roll Magazine] which has an article [with an illustration of the guitar) on pp. 22/23 ” The $27 Snap On Face Phenomenon! Sebastopol, CA – A $27 wazzit?! Heyyyyyy, don’t smirk, pedro, it’s just a rock band with another crazy name (y’know, like Blodwyn Pig or Juicy Lucy), except this one’s been kickin’ around hubbub in Northern Cal. for so long their tootsies are inflamed. Despite the fact that the $27 Snap Ons had one of the first “home-grown” singles (still selling like hotcakes), the band’s main exposure has been through Jerry Lewis Telethons and Sonoma County Battle of the Band contests. Too bad. Their first single displays the savagery of early Stones coupled with Lou Reed phrasing… and a terrific album has just been completed. If only one-tenth of the ruck & rog bands with major label contracts sounded this speedy Gonzales, you’d never again have to stifle a yawn while thumbing through the latest releases…” 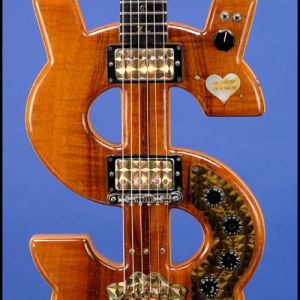 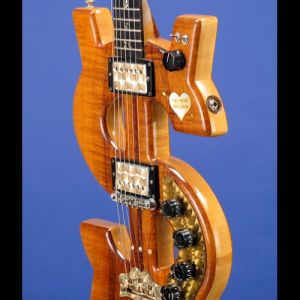 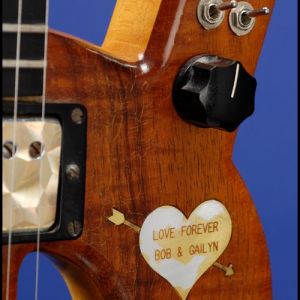 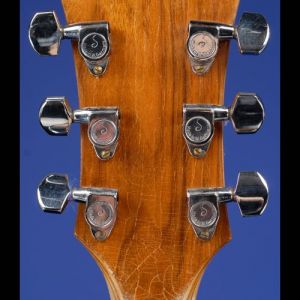 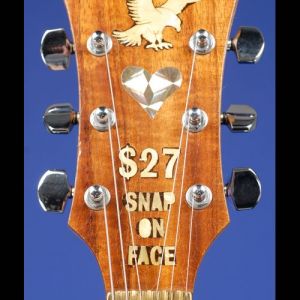 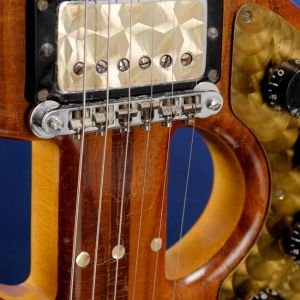 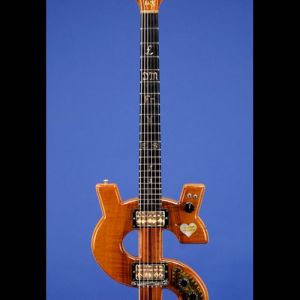